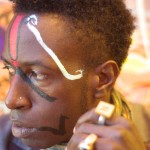 I had a busy week. I spent a lot of time in prison, so maybe I am the Phil Spector of Manchester Poetry (see last week’s post).

I was in a Young Offenders’ Institute on Thurs, where I met a lad I’d previously seen in a care unit a couple of years before. It’s a slightly weird situation to be in, because normally when you haven’t seen someone for a while your natural instinct is to say, “It’s nice to see you again” but you can’t really say that when that person has gone from one institution to another institution. I think there should be some kind of book that tells you how to behave in such a situation. Thinking about it, it might be quite a niche book. Feel free to let me know if you have any situations you need advice as to best handle it.

After the YOI, I did a session in an adult prison as part of their Black History Month celebrations. This proved to be quite challenging. Firstly there were meant to be 22 inmates, which is a lot anyway, but 28 turned up. Apparently some people tried to sneak in, who would have thought that? After a wait as the staff tried to work out how we had multiple numbers of certain individuals the group was whittled down to 22. Which although more manageable was still pretty intimidating.

Initially there was a small but vocal minority who expressed their dissatisfaction with the session. Their main annoyance seemed to stem from the fact that I wasn’t teaching them about Black History and that there was no Caribbean food, unlike last year. I can’t help thinking they were more upset about the lack of food.

So I’m stood in front of a room full of predominately hard looking black and mixed raced inmates (and 3 white guys) who seemed to be pissed off and had me as their target for their annoyance. To sum it up, it wasn’t going too well. At this point, I could do one of two things, I could carry on and show them that I was not affected or cry like a baby. Because I didn’t want to look like a pussy in front of a group of men, I continued with the session.

I addressed their concerns about it not being about Black History, but that this was a writing session and that as I am a writer and black, it qualifies as a Black History Event. I also allowed the group to write about Black History should they wish so. As the session went on, there was a definite shift in mood as I think they warmed to me and what I was trying to do. To the point that before I left, one of the guys stood up and thanked me for coming and working with them. The other guys in the group applauded at this point.

The whole experience, from start to finish felt like some kind of feel good film, I can almost see the blurb for the film. ‘One unknown comedian faces his biggest challenge yet, as he tries to appease a group of black inmates (and 3 white guys), who want dumplings, rice and peas not his brand of humour’. At Cinemas now.

Talking of prisons. Last week I spoke about how I was in a prison (in the North West) and got the inmates I met to write a line about home so that I could turn them into a poem. I did that and with a little tweaking from the librarian at the prison, Kim. Here is the completed poem.

On to other things that aren’t prison. I will be compering two gigs as part of the Manchester Literature Festival, this week. I am compering the Comedy Poetry Slam, on Thurs 21st Oct, at the Northern Pub, Tib St, Mcr City Centre. Show starts 8pm and is £3 in. For more info

The very next day Fri 22nd Oct, I will be compering a night of spokenword and music, called Speakeasy. This takes place at Band on the Wall, Swan St, City Centre Mcr. The Special guest all the way from America is Saul Williams. Doors 10pm. Price £8/5. For more info

And Finally…. It’s my Birthday this coming Weds, it’s also the spending review, which is where we find out how much the Con-Dems are going to cut the various public services and departments etc… We are led to believe that the budgets will be between 25%-40%. So in the spirit of this, if you were thinking of sending me any Birthday greetings, please cut them by 25-40%. Cheers.

2 thoughts on “It’s nice to see you again”