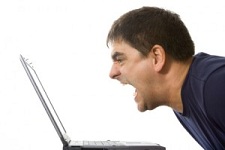 I’m writing this from the land of the free, not America, but free as in I’m not in work as the school is off for Easter, which is good as I have free time to do productive stuff, but bad because I only get paid when I work. I am however hoping to use my 2 weeks wisely. If I were prone to exaggeration, and I am, I would say these next two weeks could be the most important two weeks of my life. I’m not going to say I’m going to sort my life out, but I’m hoping after these two weeks I’ll be closer to sorting my life out, or at least have a better idea as to what I will do for work in the Summer. I will no doubt keep you informed as to my progress, although I’m sure we all know how this will end. I will get distracted by something tedious like whitening my teeth, whilst failing to do the things that would be beneficial.

In last weeks blog, I mentioned how ‘Her With One Permanent Job’ and I might be considered to be ‘one of those couples’, i.e. a little poncey (see last weeks post). After reading my comments HWOPJ didn’t overly agree with how I was portraying us and she vocalised this. About 30 secs later she piped up and said, “I’ve just subscribed to the Economist” which I feel somewhat lessened her point. I don’t even know why she’s bothering with the Economist. Firstly, she used to get it and then unsubscribed, secondly, when ever I flipped through it, it seemed a VERY serious magazine, if you’ve never read it, it’s the complete opposite of Nuts and Zoo. And thirdly, we already buy the Saturday Guardian and the Observer on Sundays so surely we don’t need any other intellectuals telling us what we should be thinking. Too much input can leave an unknown comedian confused.

In addition to the Economist, we also did quite a couple-ly thing as we spent yesterday (Sun) in IKEA. This was only the third time I’ve ever been there, but surprisingly the first time with HWOPJ. We started our shopping experience by having meat balls with potatoes. We went for the 15 meat ball option as opposed to the 20. Does anyone need to eat 20 meat balls? After the 15 I’d eaten I wasn’t exactly craving for another 5. Having said that after the meat balls we did share a cake.

The shopping itself was ok if a little tiring. It’s surprising how following arrows for a couple of hours and trying to prevent your other half  spending too much money can take it out of you. Overall I think we showed good discipline and just got the things we needed including a coffee table.

I mention this coffee table only because it caused us a little bother with one of our neighbours. Basically we live above the angriest man in the world, he’s so angry he makes Wayne Rooney look Zen. We had to create a hole in each table leg, so had to hammer the tip of the screw into the table leg as instructed. As soon as we began to create the first hole the angry man from downstairs, started banging on his ceiling. I’m not sure what his problem was, for starters it was only 6pm, it wasn’t as if it was late night. Secondly, the speed at which he started banging makes me think he has a contraption at hand ready for such a moment. And thirdly, if his annoyance was because of the noise, his banging was way louder than ours. As he’d chosen to blow his top during us doing the first table leg, it meant we were faced with annoying him on 3 more occasions. As it happened we’d not tightened two of the legs sufficiently, which meant we had to re-do the holes on these legs. I did fear that this may tip angry man over the edge, but thankfully I’m still here to tell the tale. Naturally if had come upstairs I would have mentioned these points to him or more likely hid and pretended I’d gone out.

And Finally… in the first week for as long as I can remember, I’ve not eaten any fish fingers, so we still have 14 in the flat.