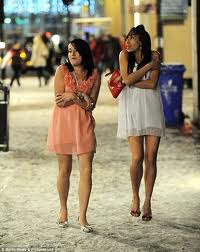 Hola. Hope you are all well.

I’m still in London, I’ve managed to do a full week without leaving. Although I do have a cold. I mention this not for sympathy, or to be mocked about man flu etc.. I just mention it cos it’s true.

The big story of the week appears to be the weather. Every time we have heavy snowfall in this country the news coverage is always the same. People are interviewed about how they couldn’t get to work, a car will be seen sliding in the background, there will be a report from salt mines as some councils fear a shortfall of grit and salt. We then get told how much absenteeism from work will cost the economy and then there will be pictures of Geordie women on a night out with very little on. Whilst we are on this subject, my advice to any young women, Geordie or not, on a night out in this cold weather is PUT A COAT ON! Guys will still fancy you if you are covered up. Trust me, the onset of pneumonia isn’t a sexy look.

The snow seemed to affect all forms of transport here in London, including the Tube. I’m not 100% sure why as the majority of the underground system is underground as the name underground would suggest. London maybe an odd place but it doesn’t snow underground, although I wouldn’t rule out Mayor Boris introducing it in the near future.

Despite the snow, I did manage to travel 1 and a half hours to play football on Fri between 1pm-2pm. I mention the time, as it takes a certain type of person to be available to play football on a Friday early afternoon. As it happens that type of person seems to be a creative type, as all the players were actors and me. So if you ever see grown men playing football at unusual hours of the day, take pity on them they are just living the dream.

The other big news of the week was the fact that England didn’t win the bid to host the 2018 football World Cup. People have asked where did the bid go wrong? I would suggest it was when we started telling everyone and anyone that would listen that the organisation that were making the decision, were corrupt. That’s what I think anyway.

And Finally… Onto another institution that may or may not be fixed and that is The X Factor. I watched a repeat of Saturday’s show and it mentioned how Zain from One Direction lost his Grandfather earlier in the week. I wouldn’t make light of his situation but it did make me think how when you go on that show, something bad tends to happen. It’s as if the contestants have made a pact with the devil for a bit of fame. This series alone, Cher, Zain and Paige have lost family members and Katie found out her 81 year old Grandma was a prostitute. It does make me wonder of it’s all worth it. Is it really better than playing football in the snow on a Friday afternoon?

Til next time, stay safe!