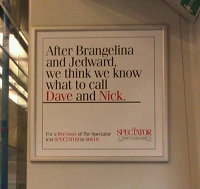 Another blog post on a Wednesday, making a mockery of my claim to post on Mondays, maybe Wednesday is the new Monday. In my defence, I had a 3 Prong Attack gig on Monday night and then yesterday I was too tired to blog (diddums).

The gig on Monday took place at a Sports bar, where the acts were competing with Man Utd v Fulham. BBC 3 were also there filming, it probably doesn’t need saying but they weren’t there to film us, they were following a mixed raced (of black and white parents) , jewish, lady. That’s some good ticking of boxes BBC. To be fair she’s the what would happen if 3 Prong Attack had a daughter, assuming Prong 2 is the woman in the relationship.

Another notable thing about the night was how often the bar’s phone rang. It got me thinking, who rings a pub? And if you are ringing a pub, what are you ringing about? In the past, I’ve rung a pub, either to see if they are showing a certain football match or to find out what the pub was doing for Christmas or New Years Eve. As it was a Sports bar you’d assume they’d be showing the football and as we were only in March I doubt people are planning their Christmas night out 9 months early. Feel free to let me know what you’ve rung a pub for. (you can comment via the comments button)

On last weeks blog post I spoke about my argument with a compere, I don’t want to speak further about this as I went into it in detail last week, but one thing I’ve noticed, is that arguing with a stranger is better than arguing with a loved one. For example, if you argue with a family member, or your other-half, you have that awkward period afterwards, then the apology and the backdown, but with a stranger there is no fall-out, you’re never going to see them again. So for that reason I would recommend it, of course if the stranger turns out to be a maniac, ignore everything I’ve just said.

And Finally… Recently I’ve been seeing various Spectator magazine ads on the trains I travel on, one says, “After Brangelina and Jedward, we think we know what to call Dave and Nick”, referring to David Cameron and Nick Clegg.  ‘Her With One Permanent Job’ pointed out this was similar to something I wrote a whole two years ago. Which shows I am ahead of the zeitgeist. And just in case people don’t believe me, here is a link to my blog post dated 17th May 2010. It was so long ago, it was the days before I blogged on WordPress.

Congrats to those who predicted I would blog this week on a Wednesday.

This week’s blog was going to be different, that was until I did a 3 Prong gig (my double act) yesterday and ended the night in an argument with the compere, as you do.

Ok, so where to start…

‘Her With One Permanent Job’ , Prong 2 and I were all sat at the back of the room, attempting to be inconspicuous. At the start of the gig the compere (the landlady’s husband) spoke about how this was a nice and supportive night, it’s the kind of spiel comperes make at an open mic night because they know the standard of acts will be variable. He then went on to talk about how everyone should be all smiles as this would help the acts. I once again assumed this was just patter and not a binding contract.

I will at this point, admit that I wasn’t at my best as an audience member. A couple of things went against me, firstly it was a hot room and I was already feeling tired after work, secondly, they had this system of not telling the acts when they were going on but randomly picking the acts. I must confess that I’m never at my best before I go on stage as I’m trying to remember my lines and the order of the set etc and with the added factor of not knowing when I was going on, I was less focussed on the comedy than I normally would be. However, I wasn’t being rude, I wasn’t chatting and I wasn’t being dismissive of the acts, I clapped when they came on stage and again when they left.

My problem came because instead of putting all the acts names in a hat (he was wearing a hat) and then pulling them out at random, the compere thought it would be better if he got the audience to choose between two numbers and whichever number got the bigger response, the act that number corresponded to was brought on stage. So he’s doing this before an act is due to come on and then starts pointing at me because I’m not shouting for either number with enough conviction and that my arms are crossed. To be honest, I half turned around unsure he was talking to me because normally at comedy clubs the compere doesn’t interact with the acts. But as it happens he was talking to me, and not content with berating me from the stage he then comes over to me to have another go at me, explaining how this is a ‘friendly and supportive’ night and that I wasn’t entering into the spirit of such a night. He then went back on stage and said something else about me (it wasn’t complimentary.

You’d think the interval might have calmed him down, but he opens the second half by saying how he studies the audience and if any of the acts aren’t being supportive enough, he keeps them waiting throughout the second half and then never brings them on. I wonder who he might be talking about?

Anyway, the second half continues and he’s drawing the acts out at ‘random’, he’s dropped the audience shouting the numbers out pretence. The acts keep coming and going, yet we have not been picked as yet. Eventually after 19 acts he says we have 1 act left, and asks “Do you want to see them”. He may as well have said, “I don’t want to put these two guys on but if you can be arsed then be it on your head”.

So the night ends and he’s at the door, cradling a bucket, collecting donations from the audience for himself, not the acts I should add. My intention was to walk past him and ignore him but then he said a sarcastic comment to ‘HWOPJ’, who responded by saying, “We won’t be back”. He then repeated this back to the people around him, this annoyed me as I felt he didn’t take us seriously, so I had to have a word with him. During our argument he kept going on about how his night was all about being friendly and supportive and me asking if coming from the stage to have a go at me was ‘friendly and supportive’, he wouldn’t answer my question. In the end I called him a “bully with a mic” because the only time he had a go at me was when he had the mic.

I say in the end, I did call him a “knob” when I was outside the pub, ironically with the enthusiasm he would have liked earlier in the evening. All this for the honour of playing 5 mins at his wife’s pub. That’s showbiz, I suppose.

I’m back blogging on a Monday, after last week’s blog was published on Thurs. Having said this, next week’s blog could be on Monday, Tuesday or Wednesday, as I will be in transit on Mon afternoon and I’m doing a 3 Prong Attack gig (the double act I’m in) on Tues evening. Feel free to speculate what day the next blog will be.

As I mentioned I have a 3 Prong gig, next Tues, 20th March at Cavendish Arms,  128 Hartington Rd, Stockwell, SW8 2HJ. Nearest station Stockwell. It’s an open mic night and we will be doing  a 5min set, best of all it is FREE! Doors 7:30.

As regular readers will know, I have been in contact with a low-budget coach company about a journey that left 59mins after it was due to, with no explanation as to why, nor was there an apology. Well it’s all ended, unsatisfactorily, for me anyway. The last email I got from the Customer Care lady said, “I thought the matter had been resolved”. Surely it’s not for her to assume the matter has been resolved, is it not up to the customer say if they are satisfied or not? The sad thing is I can’t even say I won’t travel with them, as they are cheap, especially in comparison to train prices. And that is the problem, they know people who travel with them are poor and therefore can be treated like crap. Unless of course there are maverick millionaires travelling on budget transport just to see how the other half live, although I doubt this happens outside of Channel 4 shows.

Since I’m mentioning things from previous blog posts, about a month a go I mentioned I’d started reading the novel Catch 22. Just in case anyone has been sat at home wondering how I’m getting on, at the time of writing I am on page 203 of  a 519 page book. Feel free to let me know what page of a book you are on.

And Finally… at work today (I work as a teaching assistant), I made a boy laugh despite him being ill. To most normal people, this wouldn’t be significant enough to blog about, but I have to admit I was quite pleased by this. The boy still had to go home, proving that laughter is not always the best medicine.

Apologies for the late arrival of this blog post. Normally I do them on a Monday, occasionally on a Tuesday but this is the first time it’s been as late in the week as Thursday. The good thing is that no one has complained, which shows that the readers of this blog are either very patient and understanding or aren’t that fussed which day I post, either way I see it as a positive.

Ok, so what I have been up to? Firstly, on Sunday evening I did something we should all do but probably not on a Sunday evening, I looked at my finances. It was not good but it has made me realise that I need a better paid job. I’ve not had much thinking time but I have come up with two potential jobs, an investment banker or the Chelsea  manager. In both cases I could do the job for a few days, get sacked and then walk away with a handsome payoff, and if I were a banker I’d also have a nice little pension aswell (and I wouldn’t give it up, no matter how big the public outrage was).

My financial situation is however, a double-edged sword for ‘Her With One Permanent Job’ if I were richer our lifestyle would be infinitely more glamorous but on the upside the current state of my finances means I’m officially unable to even entertain the idea of having an affair. This made me think that with their love of ‘Family Values’ maybe the Conservatives are deliberately leading us into a double dip recession, high unemployment and general misery, just so couples stay together. It’s the only reasonable explanation I can think of.

That’s it for this week, hopefully next week things will be back to normal (unless this is now the new norm)